Home | Cycling | From Lecco to Milan

Completing the cycle path between Lecco and Milan by mountain bike is without doubt one of the most interesting sporting and cultural experiences our region has to offer. 75 kilometres completely separated from car traffic, starting from Lecco’s lakefront to arrive in Via Melchiorre Gioia in the Lombard capital.

All of this is pedalling on a flat surface mixed with asphalt and dirt roads. The route has no particular technical difficulties, but the long distance makes it perhaps more suitable for people with adequate physical preparation.

Starting from Lecco’s lakefront, cross the Azzoni Visconti bridge and take the Adda cycle/pedestrian path. From here on, it is virtually impossible to take a wrong turn, and the route, which is closed to vehicular traffic, initially runs alongside Lake Garlate, then continues along the Adda, where it is impossible to avoid being distracted by the imposing hydroelectric power stations and the sluices on the canals.

Having said goodbye to the province of Lecco, you briefly enter the province of Monza and then the province of Milan. The road surface also changes, from unpaved to asphalted, and then following the Martesana canal you arrive in Milan. There are many points of interest, from the Ferry of Leonardo in Imbersago to the Sanctuary of the Rocchetta in Paderno d’Adda, continuing with some well-known hydroelectric power stations such as Esterle in Cornate d’Adda and Taccani in Trezzo sull’Adda, and finally the Martesana cycle path that takes us to just a few metres from Milan Central Station. 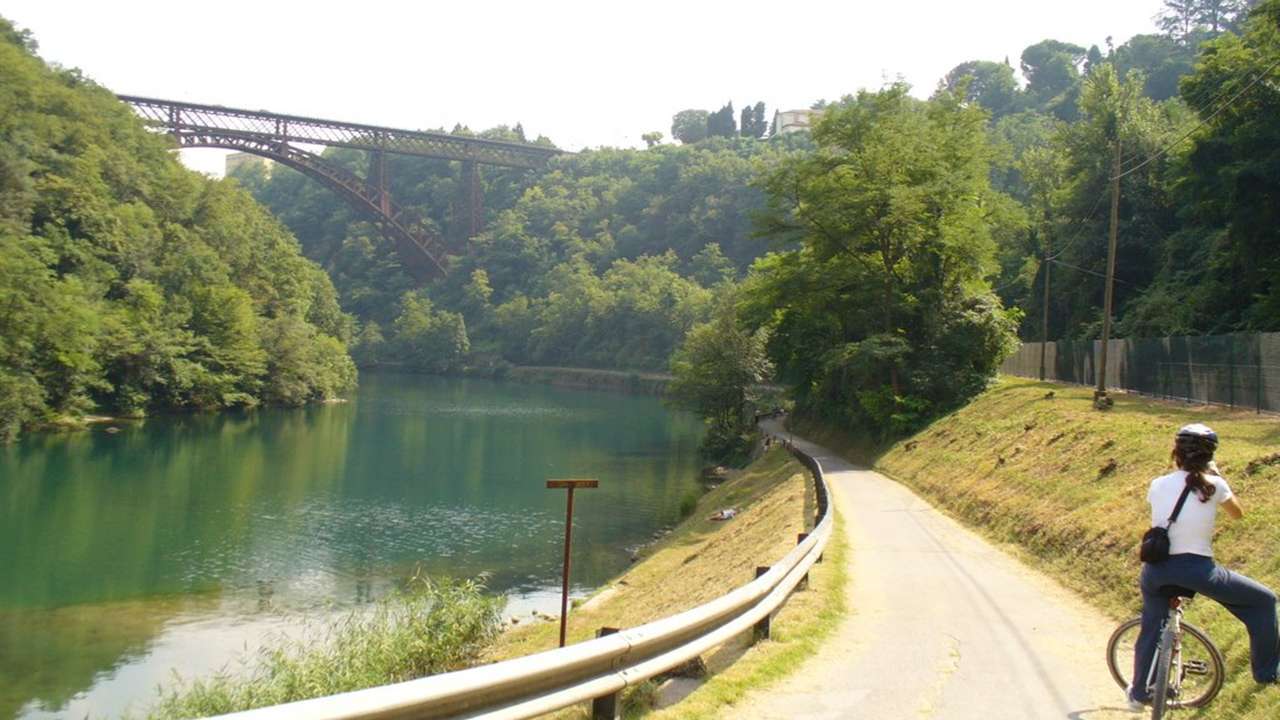 The starting point for our itinerary is Lecco’s lakefront. From here we cross the Azzone Visconti bridge, and this is the only stretch where we cycle alongside vehicular traffic. From Via Alzaia we start to skirt the river Adda, taking the cycle/pedestrian path that allows us to keep the river on our left. It is practically impossible to go wrong! Thanks to the presence of a dam, the Adda then flows into Lake Garlate.

Continuing along the cycle/pedestrian path, immersed in its wild environment, which makes it even more attractive, we arrive in Imbersago, where it is advisable to stop for a few minutes to admire the famous Traghetto di Leonardo, a special type of hand ferry, of which there are only two examples in the world, supposedly designed by Leonardo da Vinci himself during his stay in Vaprio d’Adda in 1506. The ferry, which was replaced in 1994 with an aesthetically identical version that meets current safety standards, connects the Imbersago and Villa d’Adda docks.

After Paderno d’Adda, which is one third of the total route, you enter the province of Monza at Cornate d’Adda. The main attraction here is the Santuario della Rocchetta, a structure overlooking the river dating back to 1386 that geographically belongs to the Lecco municipality but is part of the parish of the Monza municipality. Built by the Milanese doctor Bertrando da Cornate, the sanctuary is included in the stages of the Cammino di Sant’Agostino.

Continuing on to Trezzo sull’Adda you not only arrive in the province of Milan, but you can also admire two of the most impressive hydroelectric power stations on the itinerary. The first, the Carlo Esterle at Cornate, was commissioned in 1914 and at the time was a very important work, 85 metres in length. The second, named after Alessandro Taccani, is within the territory of Trezzo sull’Adda, dates back to 1906 and displays architecture in perfect Art Nouveau style.

Immediately after Trezzo sull’Adda, the Martesana cycle path begins, which runs for 30 kilometres along the Martesana canal on a mostly asphalted surface to Cassina de’ Pomm in Via Melchiorre Gioia in Milan. Characteristic of this stretch are the numerous villas of Milanese nobility built on the left-hand side of the route, the numerous parks with fountains, and the cafés that, considering the kilometres already travelled, may be useful for a short break.

The last stretch of our itinerary is the one that joins Vaprio d’Adda to the arrival in via Melchiorre Gioia in Milan. In these last few kilometres we pass through several rural municipalities in the province of Milan, from Inzago to Villa Fornaci and the better known Gorgonzola and Cernusco sul Naviglio, areas rich in farmsteads and immense agricultural fields. At the end of the cycle path, we come to Via Melchiorre Gioia, a stone’s throw from the Central Station.