The Church of Santa Maria del Tiglio it’s a fairy-tale place with such a unique atmosphere.

The Church of Santa Maria del Tiglio it’s a fairy-tale place with such a unique atmosphere.

Gravedona is nicknamed the place of the hundred churches, but this deserves a special mention. It is also thanks to the position that it enhances the feeling of peace and respectful silence that one breathes when arriving here. The green of the lawn and the blue of the lake that surrounds the building create a foreshortening that seems to be born from the brush of the best artist. Gravedona was part of the Republic of Tre Pievi, a semi-independent Lombard territory established after the Peace of Constance (1183). For about four centuries it was an important center for the spread of Christianity. He had the privilege of having his own magistrates, of beating coins and of having his own banner. The emblem of the Republic of Tre Pievi is still today the emblem of the three countries that were part of it.

The Church of Santa Maria del Tiglio rises on what can be called the sacred area of ​​Gravedona, including the nearby parish church of San Vincenzo (1072), of which the crypt is worth visiting. This was a place of worship already in Roman times. In the two churches there are recycled materials from this era. The church is mentioned for the first time as an early Christian baptistery of the fifth century, dedicated to St. John the Baptist. The religious importance of the place is then sanctioned by the building of the complex formed by the plebeian church and baptistery.

In the documents of an ancient West German abbey, we find a text, from 823, which speaks of a miraculous fresco painted in this church, depicting the Adoration of the Magi, which for two days shone with its own light. The building restored in the 12th century is traced back to Queen Teodolinda. The name derives from a lime tree grown on the bell tower at the end of the construction. It is a clear example of Romanesque style, built using local stone, white Musso marble and Olcio black stone.

The façade is enlivened by hanging arches, pilasters and loopholes, while here and there the windows adorned with cords and profiles act as a counterpoint to arcades, columns, niches and apses. At the rear is the bell tower with a square section at the bottom and an octagonal section at the top, with mullioned windows and three-mullioned windows below the belfry. Looking at the façade, one can see white, symbolic square blocks. One shows the knotted snake, one the deer wounded by an arrow stuck in the throat. Then the carved figure of Sagittarius. Among them, a geometric representation worthy of attention.

Climbing further up we find the hanging arches, each made in a single block, surmounted by saw teeth. On this same façade, a little higher up, there is a carved face, but not in the manner of the Comacini. In fact it should be a Roman head, coming from a funeral kit. On two different blocks, roundish protuberances can be observed, the tett de la regina, popularly attributed to the Lombard queen Teodolinda who subsidized the restoration work.

Inside the atmosphere is sober, essential. The empty spaces invite recollection, while the eye runs from the austere pavement and the frescoes on the walls. Among the most significant, the one depicting the Universal Judgment of the fourteenth century. Below the story continues with the depiction of the seven vices and the seven virtues, up to the widening of the perspective with the Celestial Jerusalem, in which the anonymous fourteenth-century painter placed the scenes in boxes. He inserted the recognizable bell towers of S. Maria del Tiglio and that of the Abbey of Piona.

The wooden crucifix dating back to the 13th century is also splendid. The Crucifix was carved from a single poplar trunk that was not emptied inside and the subsequent arms with alder wood. The technicians underline the similarity of the Crucifix with French workshops and especially with the bronze Crucifix of the Werden abbey. Looking at the face of this very ancient Christ, we realize that it contains the whole mystery of Death and Life. He is a Man who does not seem as young as so many Christs represented, he is timeless, eternal.

Outside the quiet of the lake, with the turquoise of the water that acts as a stage for the green slopes of Mount Legnone, on the opposite side of Lecco, leads us to harmonize with what surrounds us. 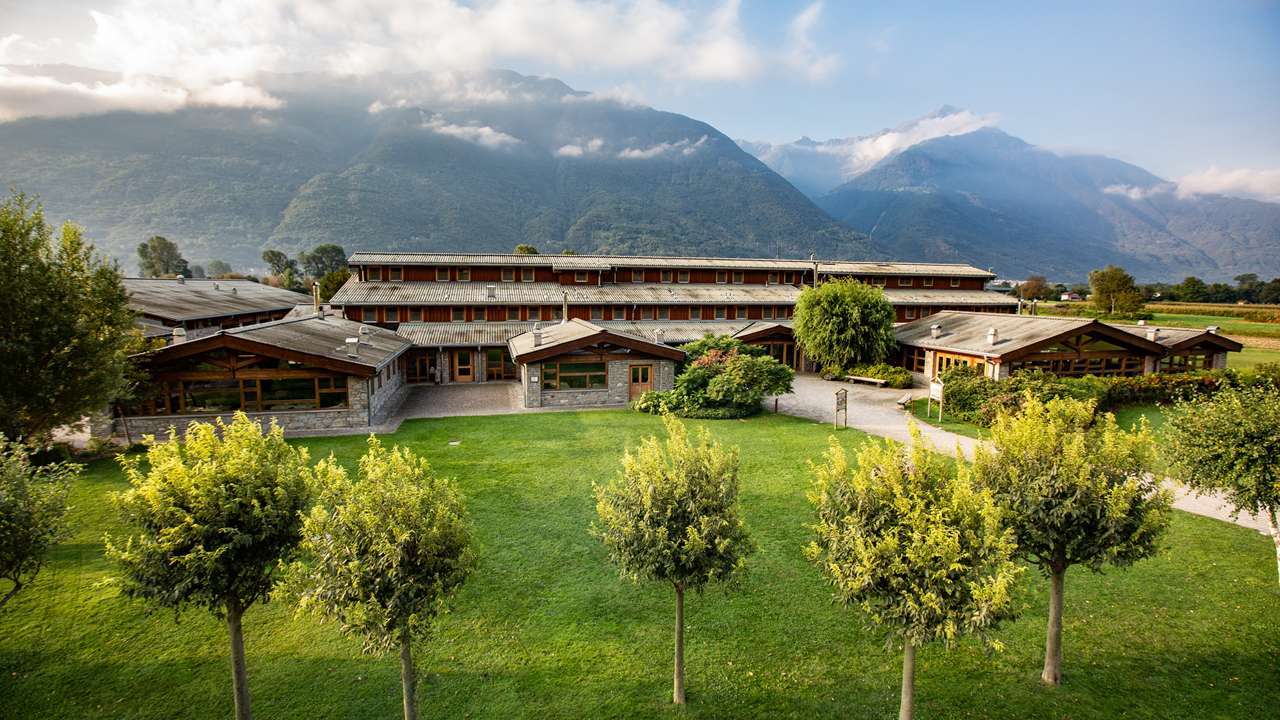